Hingway Films is where my self and the mighty Greg Andrew make short films, these films are made for fun and are a great place for us to hone our skills.

I was very excited about working with The Fall of Eve, (Facebook)as a youngster I jammed many an hour with guitarist Michael at the local youth centre and had been loosely following his musical career ever since.

Making of the The Fall of Eve – “Destiny”.

From the start, there was a clear vision from the band that the video would be composed of two distinct flavours. The first being a band performance and the second a short film and then these two pieces would be combined to make the music video.

Greg took on the role of creating and directing the story part and I took on the band performance, camera work and editing.

With any project, a plan is needed and the band were not short of a plan. As is to be expected when you are spending a sizeable amount of money on your project, you want it to be the way you want it to be. All credit to The Fall of Eve (Michael and Laura) they put forward clear ideas using YouTube videos and visual storyboards, they organised and achieved everything they set out to do, especially impressive was their efforts in securing the historic Trinity Church in Irvine for the band footage.

When it comes to creative projects, communicating your ideas and concepts clearly and accurately to others is sometimes the thing that gets lost in translation. This is where great communication, patience and experience comes into play. I set up a Facebook message thread, encouraged the band to send me there ideas and questions as well as a few face to face meetings, including venue and locations scouts. By the time we got to the weekend of filming both parties were clear, on what we as a creative team were trying to achieve.

With every plan, there will always be challenges. The first major challenge was the venue, the Trinity church is a council building and Laura did a great job at communicating tirelessly with the council in securing the building. Secondly the bands main drummer came up against a hard spot and the band at short notice had to call in a session drummer to make the video happen, finally me and Greg realised we would need an extra pair of hands to move stuff around and make sure things ran as smooth as possible whilst we did our thing, so to implement our vision on recommendation of Greg I brought in the very well round Chris of Dead Ayr Productions as a runner.

There was a number of technical challenges brought out in the filming of Destiny.

Locations – the video was shot over two days, the first day was in the historic Trinity church for the band footage and the second day for the story was shot at Irvine beach.

Church – there wasn’t many if any technical challenges here, I created a click track with multiple beeps for my post-production syncing. The band were super tight even with the last minute drummer change. 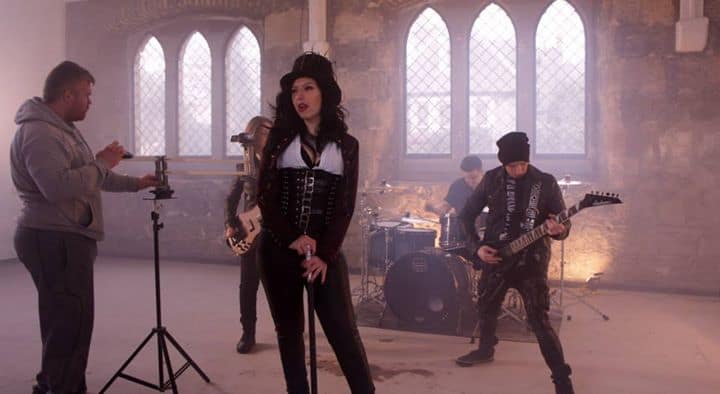 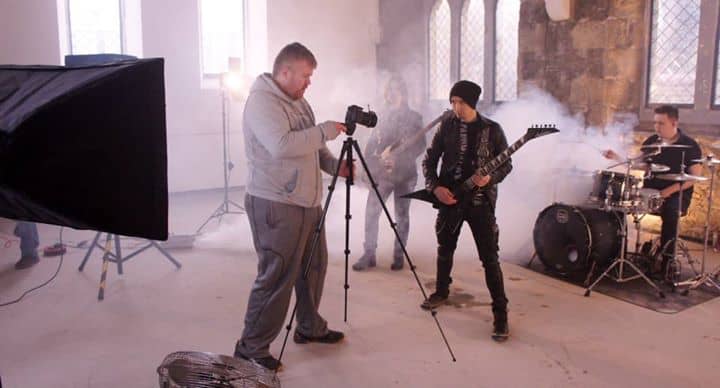 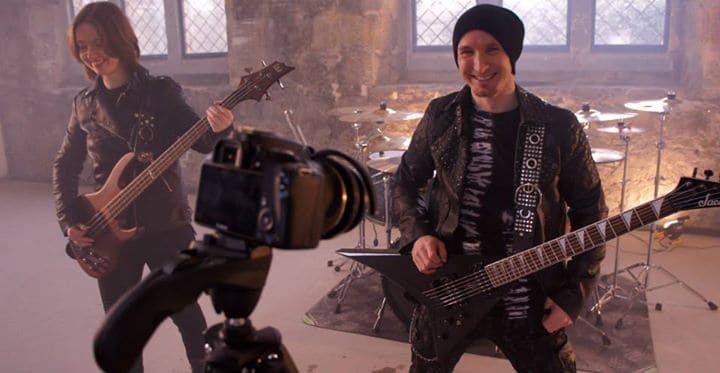 Images copyright of The Fall Of Eve

Beach – The main challenges with filming outdoors as always was the elements, with a weather forecast of OVERCAST, which in fact turned out to be crystal clear blue with the sun high in the sky. This was not ideal as the post-production grading was a day for night like shoot and the direct and very bright light is no the best for this technique, however, I managed to pull it off in the edit. The other challenges of the beach were the simple things like lighting a fire and crowd control in a public place, required for consistency in the long shots. On the day Greg’s clear direction and vision allowed me as a cameraman and the crew (Big Chris) and the actors to get everything moving super smooth. Again The Fall Of Eve came to the beach with there props and costumes, organised, on time and full of zest.

The final technical challenges would all surface in the edit. 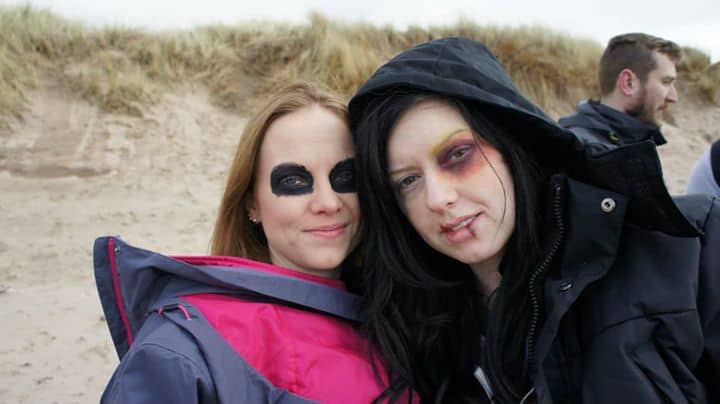 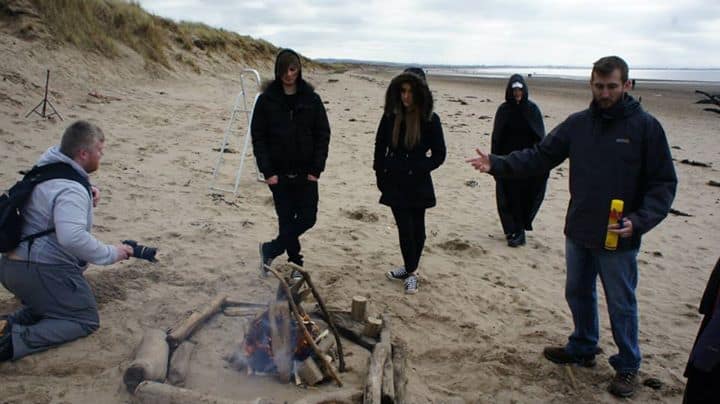 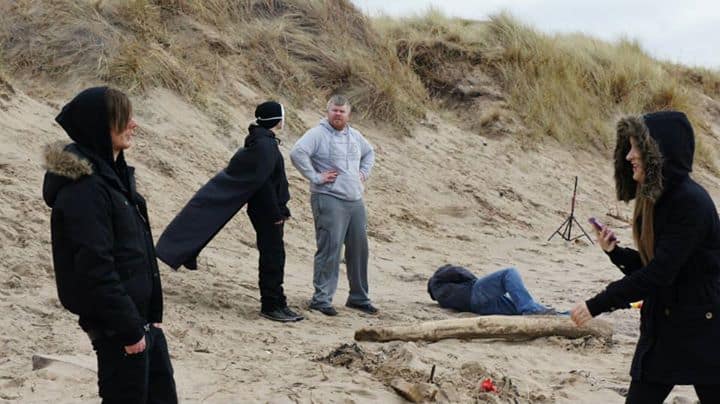 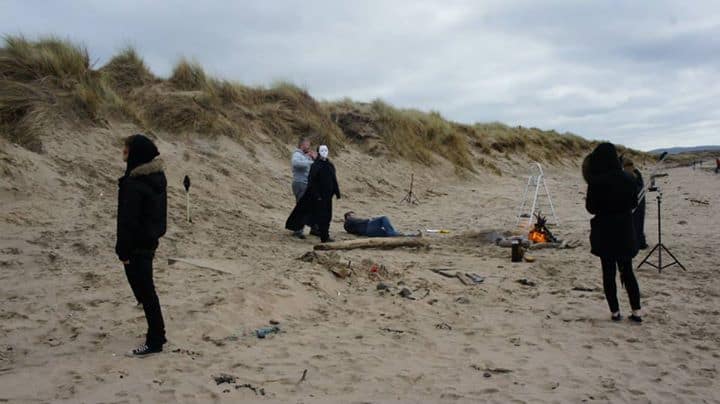 Images copyright of The Fall Of Eve

So now I had a lot of footage and no mastered audio. The band’s track had not come back from the audio engineer so I began my edit to the UN-mastered sample.

Editing is big so you need a plan, a process.

It took me around 30 hours to edit The Fall of Eve – Destiny music video. My process- Create a rough cut, export and create all VFX (eyes, fire, flicker), edit these in and perform the grading (day for night for the story part), then master this with new audio before outputting it in the bands desired medium. In the middle of this process my computers graphics card blew up and I got the fabled blue screen on death. I Took this as an opportunity to upgrade my computer and after the set back of building a new pc, setting it up and relinking all the footage I was back in business. With some good solid feedback throughout from the band and we were done.

VFX- Eyes- For both Kerry and Evangaline the eyes needed to be changed. This was a simple affair requiring the shot to be tracked and the Photoshopped eye layer applied to the tracking information in after effects.

Fire and Glow- All of the fire was added in post, even though we had fire live on the beach. The days filming in the direct sunshine made it hard to see and once the day for night grading was applied it was necessary to add fire, flicker glow and spark to the shot. Again each of these was tracked with a matted flame added to it to create the illusion of real fire. 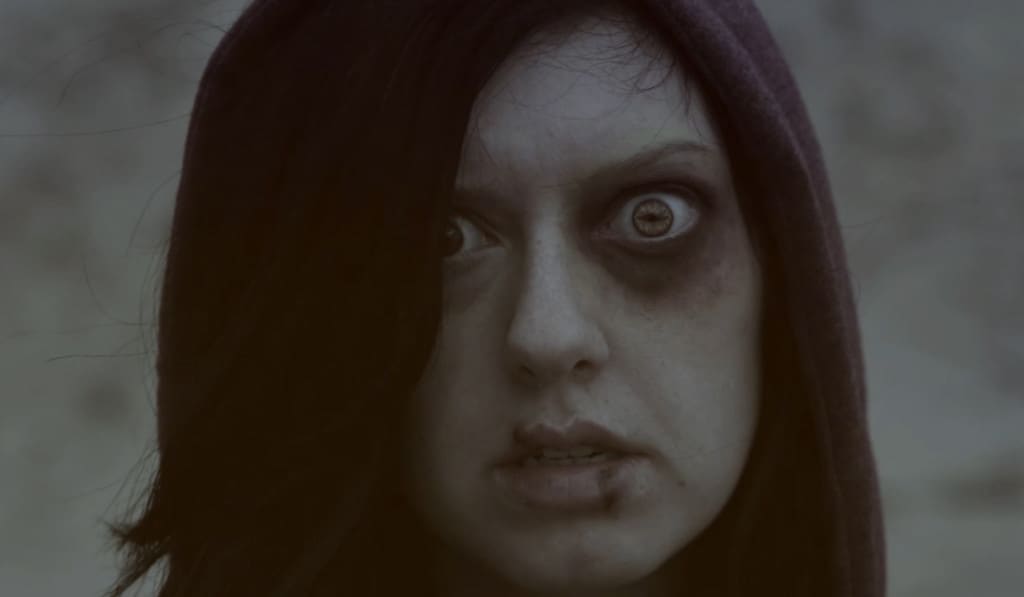 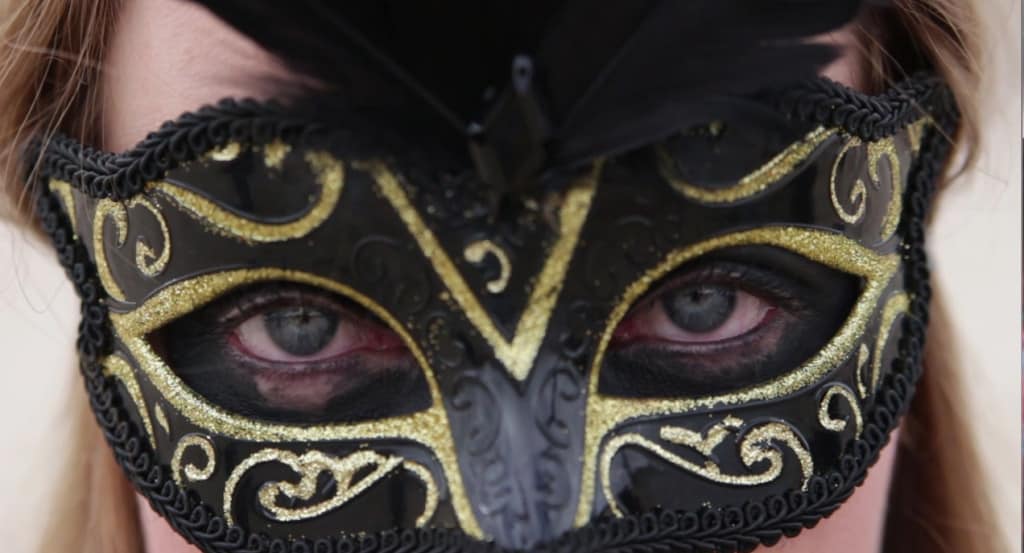 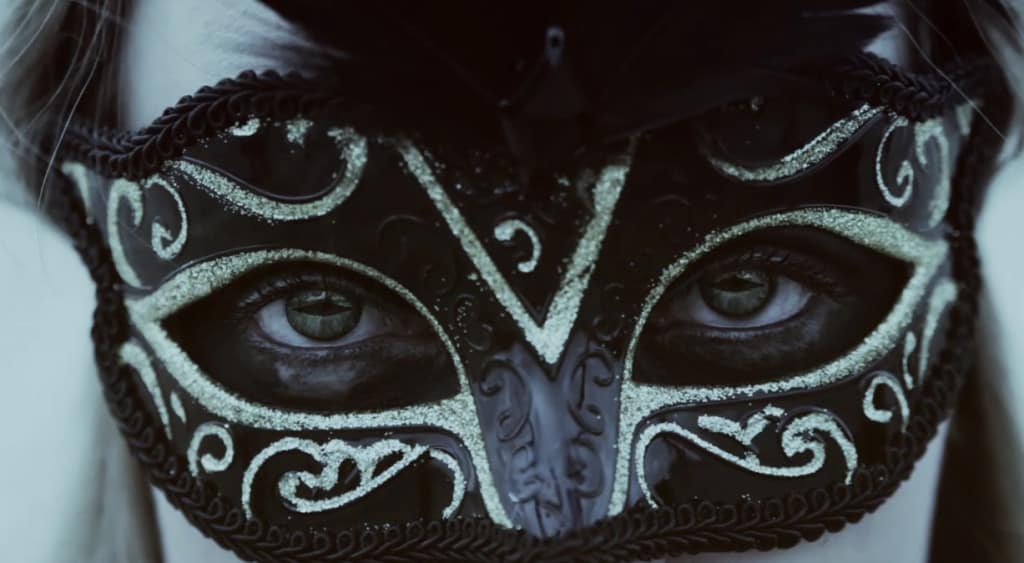 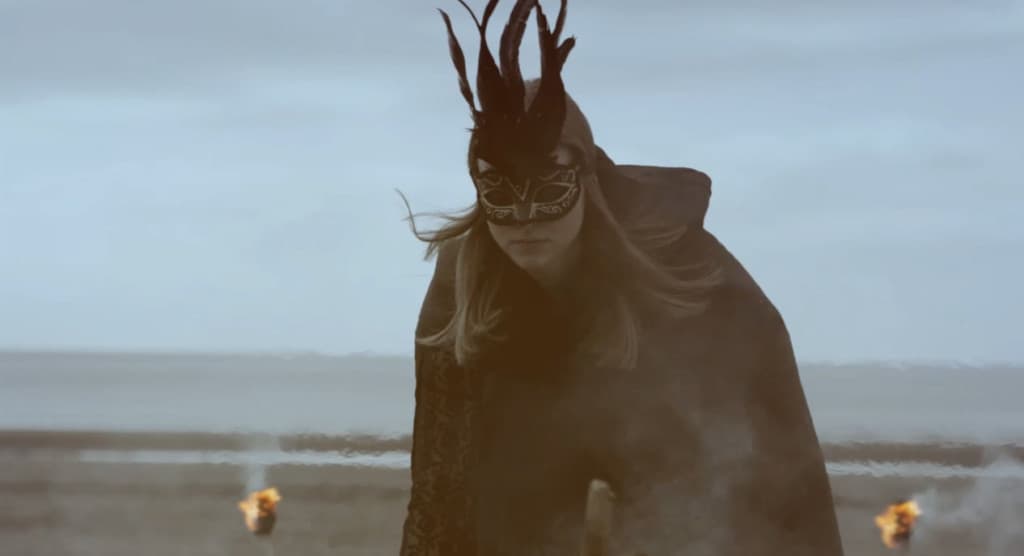 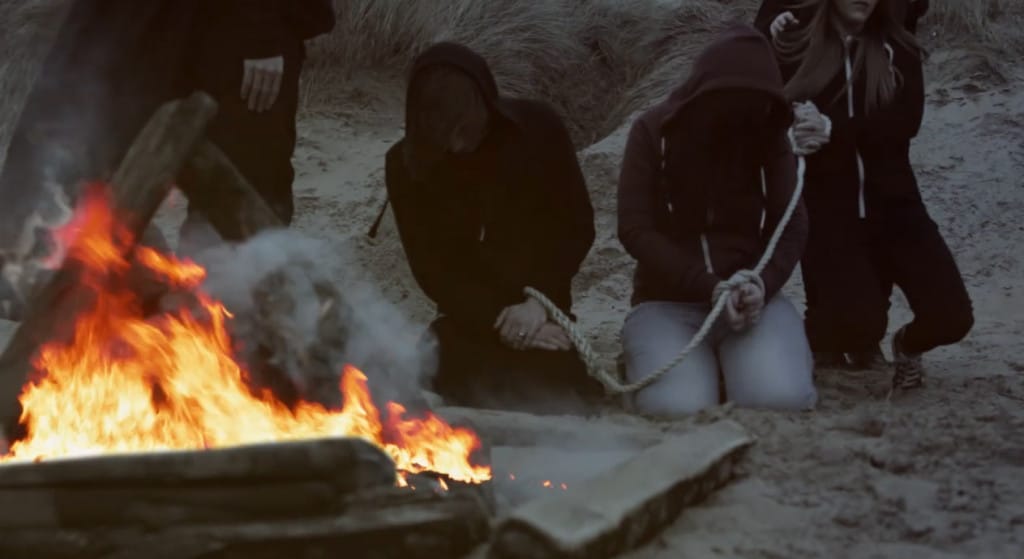 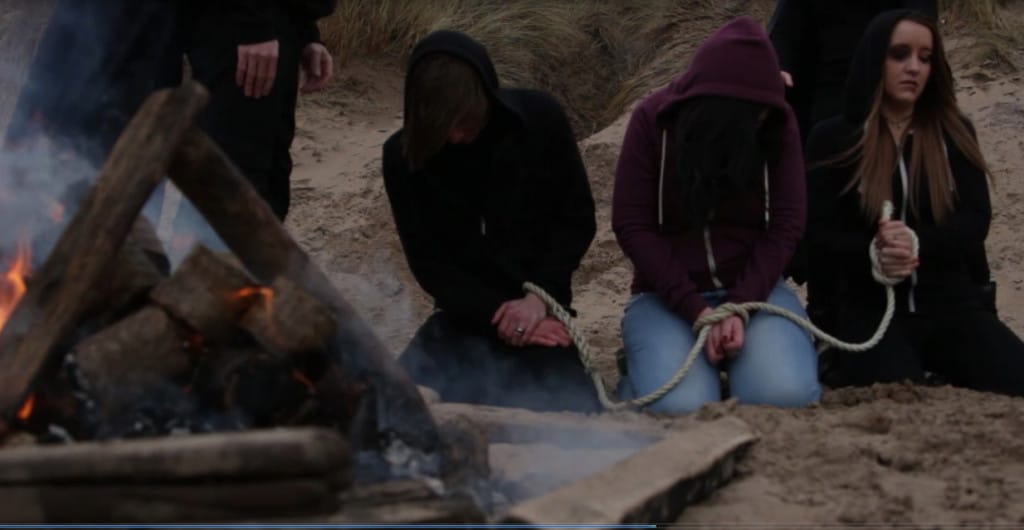 The final video for The Fall of Eve – Destiny  I believe it is fast, exciting and with a good creative flare.

In the first three days, the video has seen over 1000 views on YouTube and received lots of positive reviews and comments. (Update:2019 +150,000 views)

Excellent – hope this has been a somewhat interesting insight into how I make a music video.

If you have any questions about any aspects of the video and its production please feel free to ask away.

IF you are a band and you are looking for a music video please feel free to leave a comment or contact me through the contact form found here.

Again thanks to The Fall Of Eve, Greg Andrew, Big Chris of Dead Ayr and the excellent actors. It was an ace project.